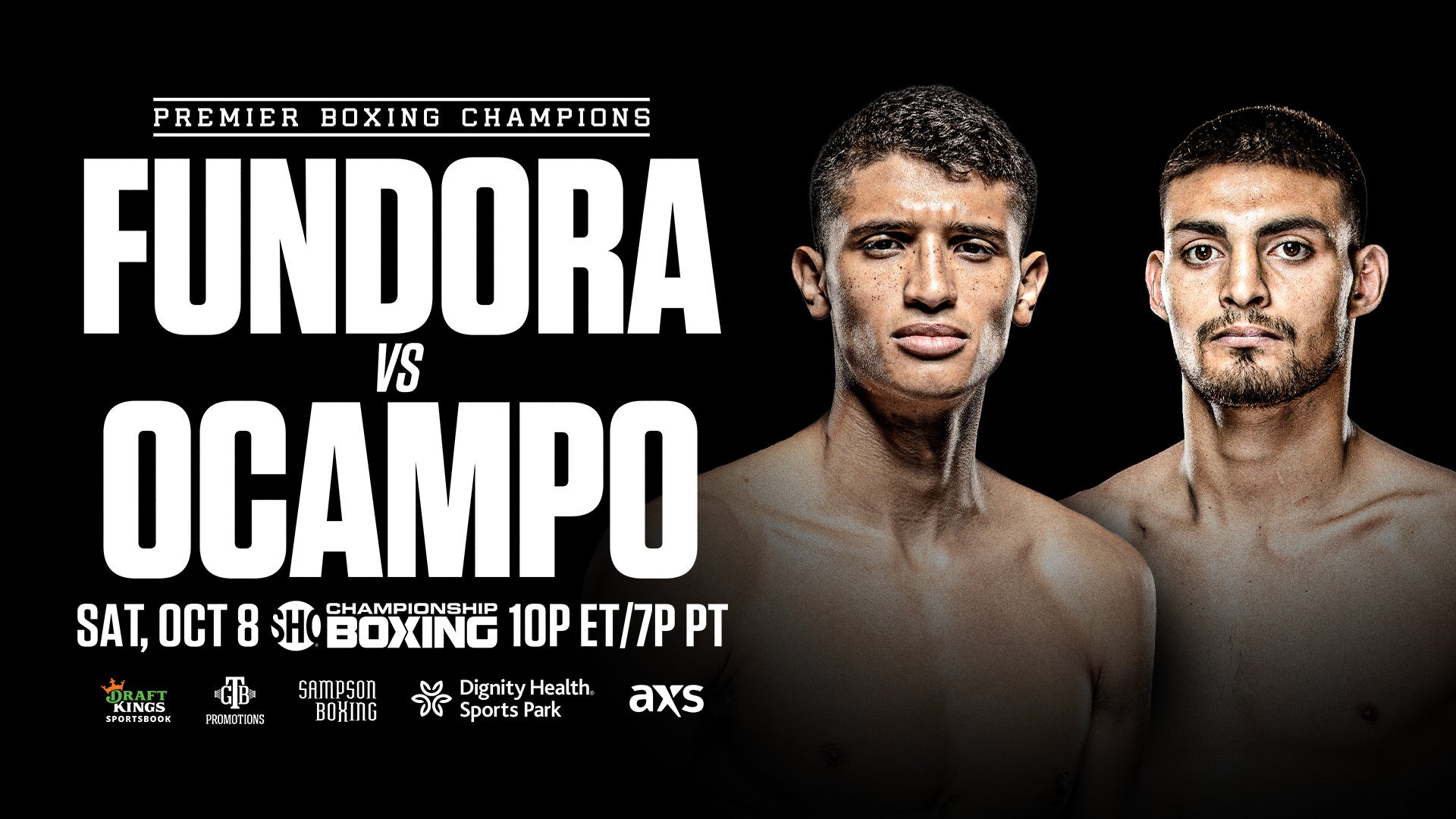 Tickets for the event, which is promoted by TGB Promotions and Sampson Promotions, go on sale this Wednesday, August 24 at 12 p.m. PT and can be purchased at axs.com.

“Sebastian Fundora has proven that he’s more than just an all-action brawler and has stamped his place as one of the most dangerous fighters in the stacked 154-pound division,” said Tom Brown, President of TGB Promotions. “He’s a perfect match for the Dignity Health Sports Park, which has brought the best out of fighters for years, and he’ll return in an intriguing showdown against Carlos Ocampo and his 12-bout winning streak. Combined with two evenly-matched duels on the undercard, October 8 shapes up to be another memorable night in Carson, California.”

Fundora (19-0-1, 13 KOs) has rocketed to the top of the super welterweight division with a fan-friendly style and bruising toughness in the ring. At 6-foot-6, the unbeaten 24-year-old southpaw from Coachella, California, towers over his opponent, but has proven time and time again to prefer toe-to-toe combat from short range. Fundora showed his mettle in his last fight, battling the hard-hitting Erickson Lubin in an instant 2022 Fight of the Year contender. Despite both men hitting the canvas, Fundora stood tall in the end, prompting Lubin’s corner to stop the fight at the end of the ninth round.

"I'm very pleased and honored to be back in action on October 8,” said Fundora. “I’m excited to be back at Dignity Health Sport Park and on SHOWTIME defending my WBC interim title against a quality ranked fighter like Carlos Ocampo. On top of things, my sister Gabriela Fundora will be performing on the same card, and we’re definitely training hard to give everyone a great show.”

Ocampo (34-1, 22 KOs) is riding a 12-fight win streak dating back to his first and only career setback, a KO loss to current unified welterweight champion Errol Spence, Jr. in 2016. During the 12-fight stretch, nine of the victories have come by stoppage. The 26-year-old from Ensenda, Baja California, Mexico will have to be at his best if he wants to keep that streak alive against one of the hottest boxers in the super welterweight division in Fundora. In his last fight Ocampo scored a victory by first round KO over Vicente Martin Rodriguez on June 11, his first U.S. action since the Spence bout.

“I’m very happy to have the opportunity to be fighting on the big stage again and even better that it is against a great fighter like Fundora,” said Ocampo. “I know that he is a warrior inside the ring, just like me. This is going to be a can’t-miss fight for the fans. I would like to thank everyone involved in making this fight, but especially my daughter, who is my inspiration every time I step into the ring."

Adames (21-1, 16 KOs) is quickly becoming a force in the middleweight division as he nears his first world title opportunity at 160 pounds. He fought three times in 2021, scoring two KO victories and getting a majority decision over top contender Sergiy Derevyanchenko in his last fight on December 5. The 28-year-old Adames was born in Comendador, Dominican Republic and now lives in Washington Heights, New York. He established himself as a contender with a slew of victories over the likes of former champion Carlos Molina, Frank Galarza, Joshua Conley and Alejandro Barrera, with his only defeat coming by narrow decision in a 2019 154-pound title fight against Patrick Teixeira.

“I’ve been waiting patiently to get back in the ring and bring the fans another war,” said Adames. “Being in a fight like this has me motivated like never before. A win against a tough fighter like Montiel will do wonders for my career. I’ve been eager to showcase what I’ve been working on and show the fans that I’m the next middleweight star. On October 8, I’m going to get one step closer to becoming the first Dominican middleweight world champion of all time.”

The 28-year-old Montiel (23-5-2, 23 KOs) showed his grit and determination in the ring as he battled for 12 grueling rounds against middleweight champion Jermall Charlo in June 2021. He slugged it out with Charlo and came up short in a unanimous decision loss to the world champion, but improved his stock as a contender. Fighting out of Los Mochis, Sinaloa, Mexico he bounced back six months later with a third round KO victory over Christian Soto Valvarde on December 22.

“I made the mistake not taking it up another level against Jermall Charlo,” said Montiel. “That will never happen again. I’m thankful to my team for another great opportunity and I’m going to make the most of it. This time, when Carlos Adames is hurt, and he will be, he is going to sleep. I learned my lesson about letting opponents escape.”

The unbeaten Martinez (14-0, 8 KOs) became the first world champion promoted by his countryman, former world champion Marcos Maidana, with a scintillating victory over Ancajas on SHOWTIME in February. The 31-year-old from Avellaneda, Argentina made the most of the opportunity, landing a division record 421 power shots of the 427 total punches landed to secure a unanimous decision victory over Ancajas. Now he will look to repeat the feat and establish himself as one of the division’s best.

“I’ve been having an excellent training camp ahead of this rematch,” said Martinez. “I proved that I was up to the challenge back in February, and now I am ready to defend my title with all of my heart. The fans are going to see an even better Fernando Martinez when I step into the ring on October 8.”

The 30-year-old Ancajas (32-2-2, 22 KOs) decided to exercise his right to a rematch against Martinez and will now get a chance to wrestle back a world title that he held for six years and defended nine times before the loss to Martinez. Fighting out of Panabo City, Davao Del Norte, Philippines, Ancajas won the title in a lopsided unanimous decision victory over McJoe Arroyo in 2016. He dropped Arroyo in the eighth round and cruised to victory.

“It’s very weird to be in the challenger position after holding the title for over six years,” said Ancajas. “This has motivated me to work even harder preparing for this fight. I’ve made some adjustments in my training and can assure everyone that I’m going to show that the first fight was a fluke. I’m going to win on October 8 and become a two-time world champion!”