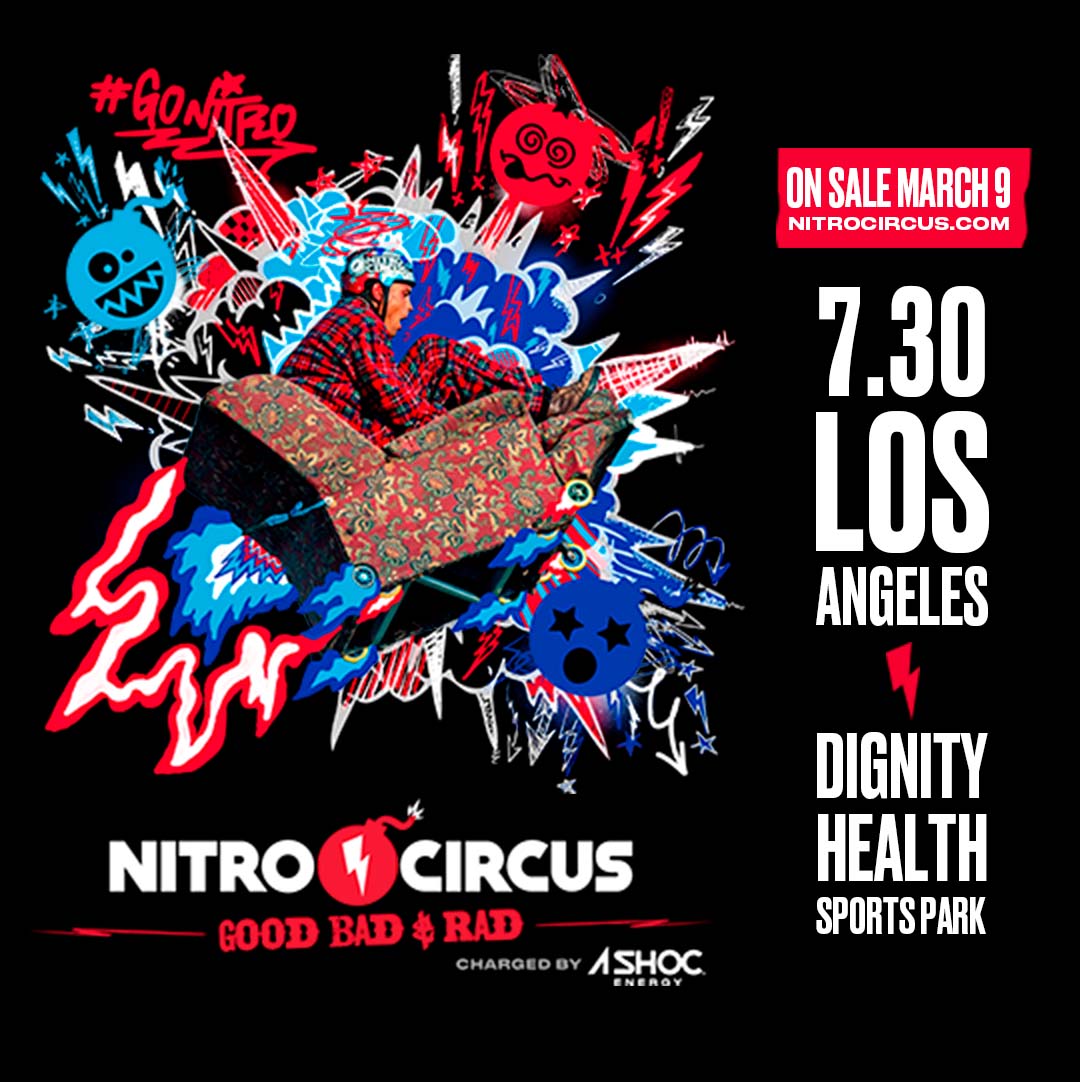 (Los Angeles) - For nearly two decades, Nitro Circus has been defined by the good, the bad, and the rad. This wild crew of action sports heroes, led by NBC “America’s Got Talent: Extreme” competitors Ryan “R Willy” Williams and the Contraption Kings plus Aaron “Wheelz” Fotheringham, has stunned crowds across the globe with an incandescent mix of world’s first tricks, bone-crushing fails and comedic moments. Now these thrill-loving hellraisers are back with a rip-roaring new live show: Good, Bad & Rad presented by A SHOC.

Produced by Nitro Circus, the tour will take over outdoor stadiums across North America including an L.A. – area show Saturday, July 30 at Dignity Sports Park. Tickets will be available for purchase at nitrocircus.com beginning Wednesday, March 9 at 10 AM.

Williams says, “I can’t wait to hit the road with this insane new show! The production team have really outdone themselves this time – Good, Bad & Rad definitely brings the crazy like only Nitro Circus can. We have some sick surprises in store for our North America fans, and to get ready I’ve been working hard at R Willy Land cooking up some huge new tricks that I am so pumped to finally debut!”

This new show captures the camaraderie of these thrill-loving daredevils who risk their lives pushing the limits, and the excitement they share with the crowd when greatness is achieved. Fans will have a deeper personal perspective, getting under the helmet to know their favorite athletes better than ever before, especially with a new on-field, premier Club Nitro VIP experience that literally puts fans in the middle of the action. Audiences from coast to coast will also be blown away by incredible new entertainment features like the Fun Box and epic new contraptions such as a flying lawnmower and a tandem pit bike.

Joe Carr, CEO of Thrill One Sports & Entertainment – Nitro Circus’ parent company – says, “After a very successful return to the road last year, Nitro Circus is going even bigger in 2022 with a brand-new tour. Across the board, this will be one of the busiest years in Nitro Circus history with 21 North American shows already confirmed and more to be added. I know that the athletes are excited to get back in front of live audiences and reconnect with our fans.”

Nitro Circus: Good, Bad & Rad is presented by A SHOC, Thrill One Sports & Entertainment’s Official Energy Drink. A SHOC’s performance-boosting energy beverages, inspired by the active California lifestyle, are a healthier way to energize with thoughtfully sourced ingredients. A SHOC meets the progression of action sports athletes’ commitment to training and competition with products that elevate their performance and focus in a more natural way.

Since launching its touring business over a decade ago, Nitro Circus has gone on to perform on five continents and established itself as a major global live event property. To date, Nitro Circus has performed more than 360 shows in over 30 countries worldwide in stadiums, arenas and festivals with a wild mix of huge world’s first tricks, jaw-dropping stunts and outrageous fun.